Chlorhexidine and why do we use it in hand cleansing gels? 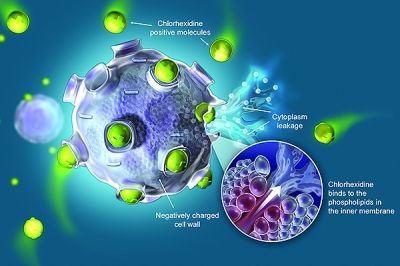 Chlorhexidine was synthesized in 1947. The formula means arbitrarily developed by English scientists in search of the latest antimalarial drugs.

The substance with the experimental number "10 040" was found to have a high affinity for the cell walls of the bacteria and rapidly cause their destruction. The new compound is patented as an antiseptic.

Initially, the tool is intended for disinfection of the skin surface and the wound, but after 3 years the scope of its indications is significantly expanded. It is actively used in gynecology, urology, otolaryngology and ophthalmology.

In 1959, the use of chlorhexidine was recommended for the treatment of oral cavity, which led to its spread in dental practice.

Over time, the antiseptic began to find increasing use. In the 80's. it is allowed to be added to the composition of cosmetics and lubricants.

It has been proven that when used externally on the skin, products containing chlorohexidine are not contraindicated in pregnant or breastfeeding women, and that after a lot of use, they have a long way to go.